Antibiotic-resistant (AR) bacteria are a global threat. AR bacteria can be acquired in early life and have long-term sequelae. Limiting the spread of antibiotic resistance without triggering the development of additional resistance mechanisms is of immense clinical value. Here, we show how the infant gut microbiome can be modified, resulting in a significant reduction of AR genes (ARGs) and the potentially pathogenic bacteria that harbor them.

The gut microbiome was characterized using shotgun metagenomics of fecal samples from two groups of healthy, term breastfed infants. One group was fed B. infantis EVC001 in addition to receiving lactation support (n = 29, EVC001-fed), while the other received lactation support alone (n = 31, controls). Coliforms were isolated from fecal samples and genome sequenced, as well as tested for minimal inhibitory concentrations against clinically relevant antibiotics.

Infants fed B. infantis EVC001 exhibited a change to the gut microbiome, resulting in a 90% lower level of ARGs compared to controls. ARGs that differed significantly between groups were predicted to confer resistance to beta lactams, fluoroquinolones, or multiple drug classes, the majority of which belonged to Escherichia, Clostridium, and Staphylococcus. Minimal inhibitory concentration assays confirmed the resistance phenotypes among isolates with these genes. Notably, we found extended-spectrum beta lactamases among healthy, vaginally delivered breastfed infants who had never been exposed to antibiotics.

Colonization of the gut of breastfed infants by a single strain of B. longum subsp. infantis had a profound impact on the fecal metagenome, including a reduction in ARGs. This highlights the importance of developing novel approaches to limit the spread of these genes among clinically relevant bacteria. Future studies are needed to determine whether colonization with B. infantis EVC001 decreases the incidence of AR infections in breastfed infants.

This clinical trial was registered at ClinicalTrials.gov, NCT02457338. 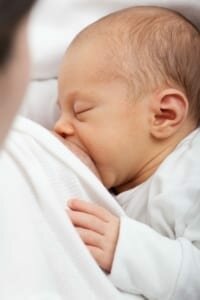